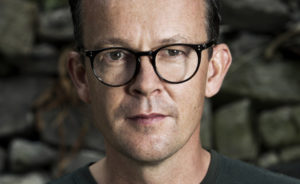 Enda Walsh is a multi award-winning Irish playwright. His work has been translated into over 20 languages and has been performed internationally since 1998.

His recent plays include The Same, which will be produced by Corcadorca in February 2017 at Cork City Gail; Lazarus with David Bowie, currently playing at the Kings Cross Theatre in London, and previously at the New York Theatre Workshop, A Girl’s Bedroom, shown at the Galway International Arts Festival (2015), The Twits at the Royal Court, the opera The Last Hotel for Landmark Productions and Wide Open Opera (Edinburgh International Festival, Dublin Theatre Festival, Royal Opera House, London, St Ann’s Warehouse, New York, 2015-2016), Ballyturk, produced by Landmark Productions and Galway International Arts Festival (Galway, Dublin, Cork and London, 2014); Room 303, shown at the Galway International Arts Festival (2014); Misterman, produced by Landmark Productions and Galway International Arts Festival in Ireland, London and New York (2011-2012); and several plays for Druid Theatre Company, including Penelope, which has been presented in Ireland, America and London, from 2010–2011, The New Electric Ballroom, which played Ireland, Australia, Edinburgh, London, New York and LA from 2008-2009, and The Walworth Farce, which played Ireland, Edinburgh, London and New York, as well as an American and Australian tour, from 2007-2010. He won a Tony Award for writing the book for the musical Once in 2012, which played for three years on Broadway and two years in the West End, and is due to return to the Olympia Theatre in Dublin in July/August 2017.

His other plays include Delirium (Theatre O/Barbican), which played Dublin and a British tour in 2008; Chatroom (National Theatre), which played at the NT and on tour in Britain and Asia (2006-2007); and The Small Things (Paines Plough), which played London and Galway Arts Festival (2005). His early plays include Bedbound (Dublin Theatre Festival) and Disco Pigs (Corcadorca).

In 2014 he received an honorary doctorate from NUI Galway.

‘I saw Ballyturk a second time at the National and am still haunted by Enda Walsh’s text, the viscerally inventive performances of Cillian Murphy and Mikel Murfi and the sombre beauty of a speech in which Stephen Rea reminded us that ‘everything is here and we are here to lay down legacy.”
Michael Billington’s top 10 theatre of 2014 (The Guardian)