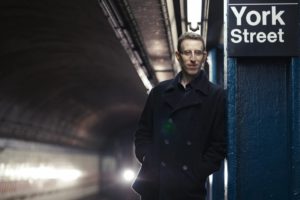 Alan Pierson has been praised as “a dynamic conductor and musical visionary” by the New York Times, “a young conductor of monstrous skill” by Newsday, “gifted and electrifying” by the Boston Globe, and “one of the most exciting figures in new music today” by Fanfare. He is the Artistic Director and conductor of the acclaimed ensemble Alarm Will Sound which has been called “the future of classical music” by the New York Times and “a sensational force” with “powerful ideas about how to renovate the concert experience” by the New Yorker.  Mr. Pierson served for three years as the Artistic Director and conductor of the Brooklyn Philharmonic. The New York Times called Pierson’s leadership at the Philharmonic “truly inspiring,” and The New Yorker’s Alex Ross described it as “remarkably innovative, perhaps even revolutionary.” Pierson has also appeared as a guest conductor with the Los Angeles Philharmonic, the London Sinfonietta, the Steve Reich Ensemble, the Orchestra of St. Luke’s, Carnegie Hall’s Ensemble ACJW, the Tanglewood Music Center Orchestra, the New World Symphony, and The Silk Road Project, among other ensembles.  He is Principal Conductor of the Dublin-based Crash Ensemble, co-director of the Northwestern University Contemporary Music Ensemble, and has been a visiting faculty conductor at the Indiana University Jacobs School of Music and the Eastman School of Music. He regularly collaborates with major composers and performers, including Yo Yo Ma, Steve Reich, Dawn Upshaw, Osvaldo Golijov, John Adams, Augusta Read Thomas, David Lang, Michael Gordon, Donnacha Dennehy, La Monte Young, and choreographers Christopher Wheeldon, Akram Khan and Elliot Feld.
Mr. Pierson received bachelor degrees in physics and music from the Massachusetts Institute of Technology, and a doctorate in conducting from the Eastman School of Music. He has recorded for Nonesuch Records, Cantaloupe Music, Sony Classical, and Sweetspot DVD.