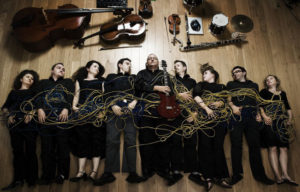 Crash Ensemble is Ireland’s leading new music ensemble; a group of world-class musicians who play the most adventurous, ground-breaking music of today.

Founded in 1997 by composer Donnacha Dennehy, Crash play music that is not part of the classical establishment; music that is new, communicative, that explodes the notion of what music is and can be.

The Ensemble has worked with many well-known artists from diverse musical backgrounds, including Steve Reich, Gavin Friday, Dawn Upshaw, Terry Riley, David Lang, Íarla Ó Lionáird, Julie Feeney, Gerald Barry, Gavin Bryars, Michael Gordon and Louis Andriessen. Crash Ensemble have recorded with NMC, Cantaloupe and Nonesuch, with the release of Grá agus Bás by Donnacha Dennehy (2011), which received international praise including a five star review from The Guardian. Their next release will be with the Bedroom Community in 2015.

As well as performing regularly throughout Ireland, Crash has appeared in the Netherlands, Sweden, Denmark, Estonia, Germany, the UK, Australia, Canada and the USA.

Crash commission new works from the most distinctive living composers, collaborate with culturally relevant artists, create exciting performances to the highest standards and record original works. We are adventurous, innovative and ambitious.

What the press say
“Massiveness and impact are characteristics that the Crash Ensemble rarely lack”. The Irish Times
“the Irish new-music band that plays with the energy and spirit of a rock group” The New York Times
“The Crash Ensemble’s fervent performances would be a sensation at the Proms”. The Times (UK)
“…you want to tap your feet, but two feet rarely seem enough”. The Guardian (UK)